Home » Food for Thought » If everyone knew one 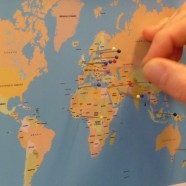 If everyone knew one

Posted by Weeks on December 9, 2015 in Food for Thought, Uncategorized | 9 Comments

I had a conversation many years ago with a mixed race friend about discrimination. She had a brilliant theory that all it takes to change someone’s heart that is hardened against one group is to know and care about one person in that group. This, she suggested was how we overcome bigotry. She said that she had African-American relatives who disliked Caucasians but that as soon as her father married a nice woman, who happened to be Caucasian, they could no longer make blanket negative comments about white people because they cared about her.

In my life I have been lucky enough to know lots of refugees. I met my first refugees in 5th grade. They were two boys from Vietnam who had been adopted by a Navy officer who lived on our block. The Goehring family had 5 children by birth but Captain Goehring met Hai and Sun while stationed in Vietnam. Both were orphans of the war and Captain Goehring called his wife and told her he’d be bringing these two boys back to the US.

The boys were welcomed into our schools and neighborhood. I admired the Goehrings for taking this chance of two boys, one 11 and the other 13 years old. I lost track of Sun but when I went to college, Hai had been accepted into the US Naval Academy and started a career in the Navy. From the time I met Hai and Sun, I could not discriminate against anyone Vietnamese because they were Vietnamese and I admired them.

Another high school classmate came to the US when the US Navy rescued his family in the South China Sea. They fled in a fishing boat following the fall of Saigon in 1975. He has gone on to become the managing partner of an investment firm with $5 billion in assets and offices around the world. Are these the kind of people we’re trying to keep out of our country?

I’ve also known many Muslims so it has pained me to here of plans to persecute one group based solely on their religion. In fact I was the matron of honor in my best friend’s wedding when she married a Muslim man. He got an MBA at the University of Virginia, became a US citizen by choice and works for the US Postal Service in their IT department. His parents have lived here for 50 years, raising children, working productively and paying taxes. Are these the kind of people we want to prevent from coming to the US solely because they were born in a Muslim country?

All of this talk of containing our enemies, reminds me of the stories of my grandfather, who died when I was 3. He was a Japanese-language-intelligence officer in the Navy who tried, but failed, to convince his superiors that Japanese-Americans during WWII were loyal to our country and posed no threat. Here we are again at the same crossroads, having forgotten the lessons we should have learned 70 years ago.

If everyone just knew one…