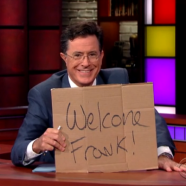 Posted by Weeks on September 26, 2015 in Food for Thought, Grace | Leave a comment

I saw something on TV this week that I’ve never seen before that made me very happy. I’ve been battling a respiratory infection and have been pumped up on Prednisone, which makes it very hard to sleep or read. Wide-awake at 3am I often watch recent episodes of late night comedy shows on demand on my laptop or ipad in bed.

I happened to catch Late Show with Stephen Colbert’s “Pope Show” which was unexpected, joyous, and funny. Stephen Colbert is a Catholic whose faith was surely tested when as a child his father and brothers were killed in a plane crash, yet he finds it a great topic for humor as well. Colbert has joked all week about the Pope’s arrival, joking that he might be late in picking up the Pope from the airport because of the show but that Francis should wait for him at the Cinnabon. Colbert invited author Andrew Sullivan, Maria Shriver and comedian Jim Gaffigan to candidly discuss their faith and the significance of Pope Francis’ visit to the US. Sullivan described how he reconciled being gay with being a Catholic. Jim Gaffigan, who performed for the Pope, talked about how he lost his faith for a period in his life and what reignited it. Maria Shriver laughed about how she begged God as a child not to call her to be a nun. The panel laughed about their shortcomings and how American Catholics are responding to Pope Francis’ teachings. Colbert also interviewed the Archbishop of Miami who is on the Pope’s Council on Global Warming.

For me it was a welcome substantive conversation that I had never seen in mainstream media about faith. It wasn’t preachy. It wasn’t about judging those without faith. It was honest. It was about what it means to have faith and that faith comes with conflicts. In our celebrity-driven media, conversations like this don’t even occur to most producers or hosts. For those of us who have watched Colbert for years, it was not surprising but still unlike anything we had seen on CBS before. It was inspiring.

Colbert’s musical guest, The YMCA Jerusalem choir, is made up of Christians, Jews and Muslims. The choir sang a spirited version of the 1970s classic, “Joy to the World.” “Joy to the fishes in the deep blue sea. Joy to you and me.” Amen.

← In a Blink Superhero →