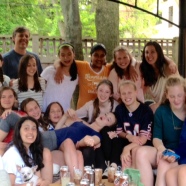 I realized 24 hrs before we were to host the first of two parties for our daughter’s friends this week that I had a massive respiratory infection and was having a hard time breathing. I began taking steroids and antibiotics per my doctor’s email (my doctor trusts my judgement about my asthma so much that we come up with a plan to deal with infections and exacerbations via email). Bill pitched in doing the errands necessary to get food on the table and I helped set up as we watched the radar to see if the storms would force us to move our party inside. Rain had poured heavily all morning and the night before as a low-pressure front moved through town, contributing mightily to my breathing problems as well.

Then around 4:30 the skies cleared and the sun came out. My Prednisone had kicked in and the departure of the storm system gave me some relief. And then I looked over and saw this happening in our gazebo. A group of 13-14 year olds from four different schools who’ve been playing soccer together all year, squeezed together on our sectional chatting, sharing Instagram pictures, talking about where they will go to high school and what they’ll be doing over the summer. We served pizza, veggies and the mandatory Ranch dip. Nothing fancy. Sophie and I collaborated putting chunks of brownies in Kerr jars, layering them with chocolate pudding, a drizzle of caramel, a pinch of Sea Salt and topping them with whipped cream and chocolate shavings for an individual Salted Caramel Brownie Trifle recipe I found on Pinterest.

Tea lights flickered, Godzilla the foster dog made his way onto all 14 of the girls’ laps as well as one of the coach’s. The girls giggled, played a spirited game of tag running around the entire block while Bill and I chatted with the coaches about their work. As they left each thanked me politely and one added, “You have a beautiful home. Thanks for hosting us!” It was a simple night, under the lacey moonlight of the three maples in our backyard. This is what I want for our daughter. A whole lot of nights in the backyard under the stars with friends, eating pizza and trifle out of Kerr jars.