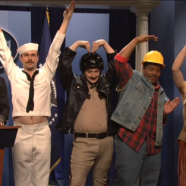 Saturday I mentioned that at long last I got to chaperone a field trip with our daughter’s school. Given that our daughter is 13 I made a mental note that I should be careful not to do or say anything that might embarrass her. The trip was for the 7th and 8th grade classes to pack food for Feed My Starving Children. This facility packs dried food for food aid organizations where starvation and digestive disorders are prevalent. Kids and adults mix prescribed dried ingredients at well-organized stations in a fun atmosphere in which pop music is usually playing.

Lots of adults and kids alike were singing along to the songs while we packed and some of the girls put their hands up when Beyonce told them to when Single Ladies came on. I kept to my pledge not to embarrass our daughter until YMCA came on at which time I made the quick mental note that there are people who are silly and do the arm movements when that song comes on and there are people who don’t. I decided in a moment that I am one of those people who will still be 90 years old, God willing, and still get a laugh out of seeing people do those stupid YMCA arm movements. Fortunately I was not alone when it came time for the beat that precedes the first Y-M-C-A in making the decision to do the arm movements. Some of the parents had decided the arm movements weren’t for them but I looked over at Sophie and she smiled when she saw me doing them and joined in.

On the way home I remembered an old friend talking about the time her parents embarrassed her the most as a teenager. “Our family was at a wedding,” she explained, “and suddenly my parents walked onto the dance floor together and danced. My siblings and I were mortified.” Good thing she didn’t see me doing the YMCA arm movements.

← The Complicated Mother’s Day Sending Out the Food →