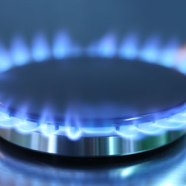 Do you smell gas?

Bill and I returned home last night to the smell of gas in our house. Not wanting to take any chances, we opened the windows, put the kittens in a carrier and went outside with Sophie to wait for the fire department to come check things out. We were standing in front of our house waiting and noticed that, to our surprise, they stopped in the block prior to ours and they weren’t using their sirens. In addition there were 3 police cars with the fire truck. They slowly advanced to our house and we noticed one of the police cars was the chief of police’s car.

“Everyone OK here?” one of the officers asked. “Yeah, we just thought we smelled some gas and wanted to be careful. You didn’t all need to come though!” we joked. “We had a ‘caution’ on this house…” one of the officers said. “You know. Sometimes you don’t know what you’re going to find. It goes way back.” We had long suspected that there was domestic abuse happening between the prior owners. There were 2x4s barricading one of the doors and double locks on the windows. There were security lights throughout the yard and lots of locks on the doors. Neighbors told us the police used to visit the house frequently. “You can take that caution off now,” I said. “A really nice guy lives here now.” We thanked the police and waited for the fire dept guys to walk through the whole house.

They said that their meters weren’t picking up any gas but that Sophie leaning against the stove checking something in the microwave above might have released some gas. They told us we should be fine and that we were smart to call them. Then one of them says to me as he’s walking out of the door, “So. How long have you been quilting?” I told him and he said, “That’s some kinda set-up you’ve got down there. My wife would die if she saw that. Man, she’d just go crazy.” After they left I wish I had sent him home with a few issues of Modern Quilts Illustrated.