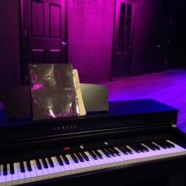 Shortly before I turned 9 my mother, sister and I moved to a suburb of Washington DC. Across the street was a folksy Midwestern housewife named Polly who lived with her husband and two kids. She was cheerful and positive about almost everything. One day she came over and said, “We haven’t been to the White House yet. Do you want to come with us? I mean we live near Washington DC! We should take advantage of it and see all of the sights and how exciting is it that we can just drive over to the White House?!” So we went. She was right. It was very cool, especially in 1970 when you could see so much more of the house. Her words stuck with me and everywhere I’ve lived since then I’ve made a point of “seeing all the sights” and taking advantage of what every place has to offer.

So when Bill and I moved to Chicago in 1996 we vowed to take advantage of everything this metro area of 9.9 million has to offer. Last night was no exception. With our daughter on a choir tour Bill and I spent a modest $15 per person to go to IO, a legendary comedy club in Chicago. Most everyone you’ve seen on SNL in the past few decades learned improv at IO or Improv Olympic as it was known before the US Olympic Committe forced it to change its name. For two hours we sat in the front row, about 5′ from 7 performers performing edgy, very funny skits with nothing but chairs. The picture is from our seats waiting for the performers to take the stage.  In the hallway were pictures of a young Amy Poehler and Tina Fey and hundreds of other legendary comedians. One of the theaters is named the Chris Farley Cabaret. Their careers started here. We do this on a regular basis because not only is it funny, it’s part of the history of where we live. IO and Second City are a part of what makes our city unique. Sometimes we stop seeing the special parts of where we live. What is unique to your hometown? How can you celebrate it? Maybe it’s a great vista or beautiful fields of corn or a 4th of July parade. I promise you there’s something there that’s more interesting than Netflix.

← New Tricks Help from Her Friends →